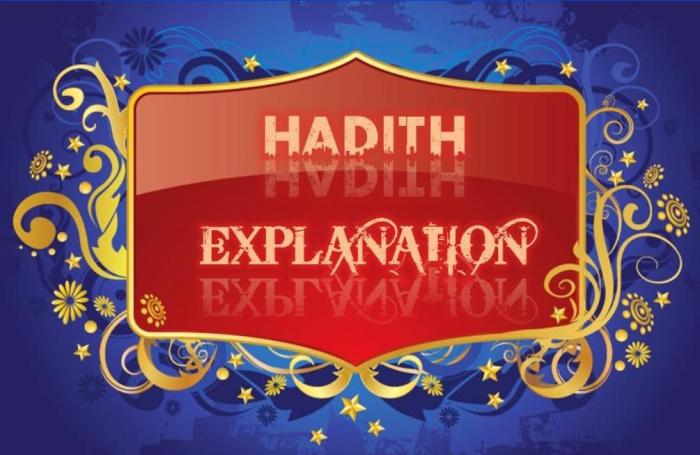 Abu Sa‘id Al-Khudri (may Allah be pleased with him) said: I heard the Prophet (Sallallahu a’laihi wa sallam) saying,

The significance of this hadith

Abu juhayfah narrated that ‘Ali bin Abi talib said, “The first kind of Jihad over which you will be victorious is to change evil actions with your hands, then with your tongues, then with your hearts, for the one whose heart does not approve of good actions, and disapproves of evil actions, will be turned upside down from top to bottom.”

Forbidding evil by the hands and the tongue

Condemning with the heart is an obligation upon every Muslim in every situation.

Ibn Mas‘ud said, “Those who are living are about to witness evil which they cannot change, except that Allah knows that which their hearts hate.”

Forbidding evil by the hand and tongue, however, is obligatory according to the person’s ability.

This was stated in the hadith narrated by Abu Bakr (may Allah be pleased with him) that the Prophet (Sallallahu a’laihi wa sallam) said, “There are no people among whom evil is committed that the ability to change it, but don’t, without Allah soon afflicting them with a punishment that will affect all of them.”

Abu Dawud narrated this hadith in the following words: Sh’abah said, “There is no people among whom evil is committed without their being (the rest of them) worse than those who commit (the sins).” [Abu Dawud – Kitab Al-Malahim, hadith 4338; Tirmidhi – Kitab Al-Fitan (Book on Temptations), hadith 2168; Ibn Majah – hadith 4005]

And it was narrated on the authority of Abu Sa‘id that the Prophet (Sallallahu a’laihi wa sallam) said in a speech, “The fear of people in positions of power should not cause anyone to abstain from saying what he knows is right.” Abu Sa‘id cried and said, “Verily, by Allah we have seen unlawful things yet we were afraid (abstained from saying what is rightful).”

This Hadith indicates that one should not be prevented from speaking the truth merely because of the position of the other, rather than from fear which excuses one from forbidding evil.

Sa‘id bin Jubayr said, “I asked Ibn ‘Abbas whether or not I should order the sultan to perform good actions and forbid him from committing evil actions. He (Ibn ‘Abbas) answered, ‘If you are afraid that he will kill you, then do not.’ Then, I returned and asked him again. Ibn ‘Abbas gave the same answer. Then, I returned and asked him (once more). Again he gave the same answer and added, ‘If you have no choice but to do so,then it should be done between him and you (secretly).’ ”

From what follows, it can be understood that fighting is not a condition for changing evil by the hand.

This was recorded by Imam Ahmad based on the narration by Salah who said, “Changing evil takes place by the hand, not by the sword or any other weapon.”

This is the Jihad of the hand that takes place against rulers when an individual removes the evil they commit with his hands. Examples of such are spilling their wine, destroying their musical instruments etc. If he has the ability, he may also nullify, with his hand, the oppression which those rulers wrongfully ordained. All these cases are allowed and are not considered fighting or rebelling against the ruler, which is prohibited. The most which can be feared from ordering good and forbidding evil is that the rulers will kill the one who advises them.

However, as for revolting against them with the sword, it is feared that it will lead to divisions which may cause shedding of Muslim blood.

If the individual is afraid to speak out against (the rulers’) evil actions because it may cause harm to his relatives or neighbours, then he should not forbid them from committing evil. This is because harm would reach others. This opinion was also adopted by Al-Fudayl  bin ‘Iyad and others. Also, if the individual fears for his life from punishment by the sword, whip, imprisonment, restriction, exile, or taking his property, etc., then he is not obliged to order good and forbid evil. All the scholars such as the two Imams, Malik and Ahmad, as well as Ishaq and others, adopted this opinion.

The weakest of Faith

“…And this is the weakest of the faith.” – This indicates that ordering people to do good and forbidding them from committing evil is one of the branches of faith.

It also indicates that he who is able to perform a branch of faith is better than another who left it because he was unable to perform it. This is proven by the Prophet’s statement referring to women, “…as for the decrease in her religion it is because she goes days and nights without performing Salah (prayer)…”  – this refers to the days of menstruation, which is still considered a decrease in their religion, even though women are not allowed to perform prayer during this time. This demonstrates that one who has the ability to perform an obligation and does it, is better than another who forgoes it due to his inability, even if he is excused and Allah knows best.

‘‘Whoever sees an evil action” – This indicates that one must see evil, before forbidding it. Thus, if an evil action is concealed even though and the individual knows of it, according to most of the narrations of Imam Ahmad, the individual should not oppose the evil action, and neither should he pursue his
suspicions. In another narration attributed to him, Imam Ahmad said that one should disclose that which is veiled if he is certain of it.

For example, if he heard the sound of singing or musical instruments and knew the location, he should prohibit it because the evil action has already taken place. In this case it would be as if he actually had seen the evil action. Imam Ahmad adopted this opinion. He added that if the place where the evil action was committed is not known, then the individual is not obliged to do anything.

As for peeking through cracks in the walls of those who are known to have gathered to commit evil, scholars such as Sufyan Ath-Thawri and others, did not allow this. Such a case is considered spying which has been forbidden. When Ibn Mas‘ud was told that there were drops of wine on the beard of a man he said, “Allah has forbidden us from spying.”

The Judge Abu Ya’ala said in the book Al-Ahkam Al-Sultanyiyah, “If an individual has been informed by someone who can be trusted of the possible committing of an evil of great consequence (such as adultery or murder), then he is allowed to spy and search in order to prevent this evil which otherwise would be committed and remain unknown. However, if the case is of less consequence, then spying and disclosing what is veiled is forbidden. The kind of evil which must be forbidden is that which all scholars have agreed is evil. However, some of our colleagues have stated that one should not forbid an action which is disputed (among the scholars) if committed by one who did it on the basis of his Ijtihad or following the opinion of a scholar who has permitted it.”

Why should one order good and forbid evil ?

It should be known that ordering what is good and forbidding what is evil is sometimes done sometimes hoping for reward, or out of fear of ignoring it, or sometimes due to anger for the sake of Allah because of the violation of His prohibitions.

It may also act as an admonition to the Believers, mercy upon them, and hoping to save them from Allah’s punishment to which they expose themselves in this life and in the Hereafter.

It also takes place for the sake of glorification and love of Allah, and that he is the One who deserves to be obeyed, remembered and not forgotten, and thanked and not be unthanked. The Muslim pays with his life and wealth to avoid violating His forbidden orders. Just as some of the pious predecessors said, “I wish that all the people obeyed Allah even if it (necessitated) my flesh being torn from my body with scissors.” ‘Abdul-Malik bin ‘Umar bin ‘Abd Al-‘Aziz used to tell his father, “I wish that our flesh was boiled in pots for the sake of Allah.”

And in all situations one must be gentle in forbidding evil.

Similarly it was said by Imam Ahmad, “People need to be addressed indirectly with gentleness when being ordered to perform what is good. One should not address them with harshness, except the man who is cursed due to his immorality, in which case he is not exempt from such harshness.”

Ahmad said, “He should order the people with kindness and humility. If they let him hear what he hates, he should not be angered and should not desire revenge for his own sake. Allah is the Best Knowledgeable.”